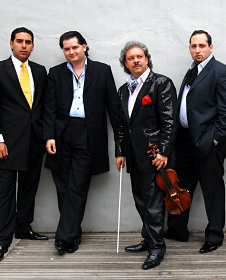 With a presentation of a unique style, which is a fusion of typical Gipsy music elements and jazz with improvisation as an important feature and specific technical effects, some of which Lakatos created himself (such as the fascinating left-hand pizzicato), Roby and his ensemble also reflected a universal approach to the musical material by including on their CD the works by composers ranging from Zoltán Kodály and Johannes Brahms to John Williams’ music for Schindler's List and Charles Aznavour’s chanson La Bohème. This album, which received the prestigious German Echo Klassik award, was followed by four more releases for Deutsche Grammophon: Lakatos Gold and Post Phrasing (1998/1999), Live From Budapest (1999), and As Time Goes By (2002) offering an equally exciting combination of jazz and Gipsy music idioms with contemporary and classical elements. Apart from recording for other labels – With Musical Friends (Universal, 2001), Kinoshita Meets Lakatos (Prime Direction, Inc., 2002), Prokofiev... (Avanti classic, 2005), Fire Dance (Avanti jazz, 2005) and Klezmer Karma (Avanti classic, 2006) – Roby Lakatos also started his own label, Lakatos Recording Company, to present somewhat different music, i.e. experimental works such as the project named The Legend of the Toad (2004), which is a sort of musical story told through his performances and the performances of his ensemble. Ensemble member, pianist Kálmán Cséki, also arranged the music. Except for his long-time associate, violinist Lászlo Bóni, Roby Lakatos’s ensemble today is composed of young virtuoso musicians with classical musical education who are also well versed in the folklore tradition of Hungarian Gypsies.