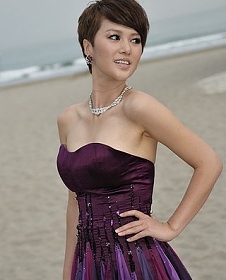 Tan Weiwei also known as Sitar Tan, is a Chinese singer and actress. She was the runner-up of the third season (2006) of Super Girl, a singing contest in China. In 2015, she participated I Am a Singer (season 3). Tan Weiwei was born in Fushun County, Zigong, Sichuan province. She spent her childhood in Zigong with her parents. As a teenager, she became interested in pop music. In 1997, she won first places in the Students Art Festivals in both her primary and secondary schools. At the end of 1998, she began to perform in bars. When she was 19, she entered the Sichuan Conservatory of Music, where many the biggest names of the mainland Chinese Mandopop singer had been trained. Although her marks were not very high, she managed to improve her vocal technique thanks to Lanka Dolma, a Chinese vocal trainer of Tibetan ethnicity, who discovered the hidden talent of the young singer. Thanks to Lanka Dolma, she learned many traditional singing techniques which nowadays, Tan uses in her recordings. And at the same year, she was honored as one of the Top Ten singers of Sichuan province.