The Magic and Madness of Berio’s Sinfonia 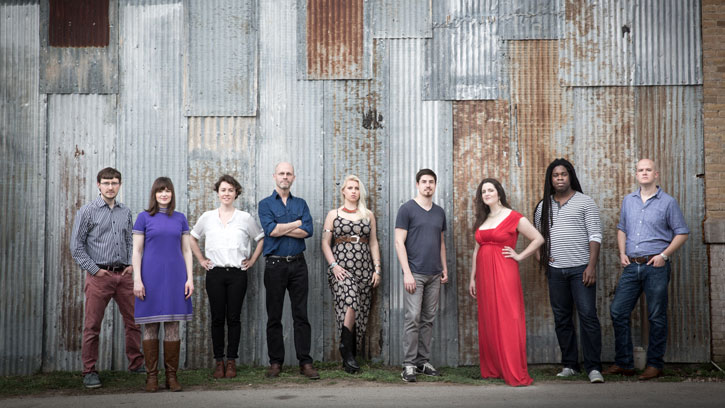 No, the voices aren’t in your head — they are the swirling syllables of eight amplified singers in Luciano Berio’s Sinfonia, coming to the Seattle Symphony on February 4 and 6. This landmark work may be nearly fifty years old, but it is eerily attuned to our frenetic, modern world. With its wild collisions of sound and its many winking quotations, the Sinfonia invites you to confront your own barrage of mental chatter while it spins you through a musical hall of mirrors, ultimately finding order amid the chaos.

For all its quirks and innovations, the Sinfonia is remarkably accessible. This quality may have rubbed off from the great populist Leonard Bernstein, who commissioned Berio in honor of the New York Philharmonic’s 125th anniversary. It also helped that Berio wrote the voice parts for the world famous Swingle Singers, who climbed the Billboard pop charts in the 1960s with their jazzy Bach arrangements.

Now a new vocal group is bringing Berio to life: the Grammy-winning ensemble Roomful of Teeth, representing the ultimate in 21st-century musicianship without borders. Just take member Caroline Shaw as an example — she was the youngest-ever composer to win the Pulitzer Prize, and yet you could also catch her as a backup violinist and singer for Paul McCartney on Saturday Night Live.

The Sinfonia itself is filled with unlikely juxtapositions and combinations. Its essence boils down to the earliest origins of the term “sinfonia” — Italian for “symphony” — which simply meant “sounding together.” This process of sounding together in the Sinfonia unites instruments with voices, acoustic sounds with electric, classical with jazz, sense with nonsense, and on and on. The other way Berio brings worlds together is through a collage of quotations, especially in the movement that functions as a twisted parody of the scherzo from Mahler’s Second Symphony, interspersed with dozens of other borrowed snippets ranging from Bach to Boulez. Still, the Sinfonia offers more than just ironic jesting; another movement is a haunting memorial to Martin Luther King, Jr., killed just months before Berio introduced his work.

As much as he was a trendsetter, Berio was also a student of history, absorbing from Richard Strauss the art of exuberant orchestration, and following Beethoven’s lead in reshaping old forms for his own purposes. (Strauss and Beethoven, incidentally, are both quoted in the Sinfonia.) Hearing Berio’s singular score on the same program as Strauss’ tone poem Don Juan and Beethoven’s Second Piano Concerto underscores just how solid the Sinfonia is, even when it dares to be outlandish. Whatever preconceptions you arrive with about Berio, you are sure to leave with your head spinning once Ludovic Morlot, the Seattle Symphony and Roomful of Teeth tear into this modern masterpiece.

To hear Berio’s Sinfonia performed by Roomful of Teeth and the Seattle Symphony, reserve your seats for the concerts on February 4 and 6.