Revel in the brilliant colors of Celebrate Asia 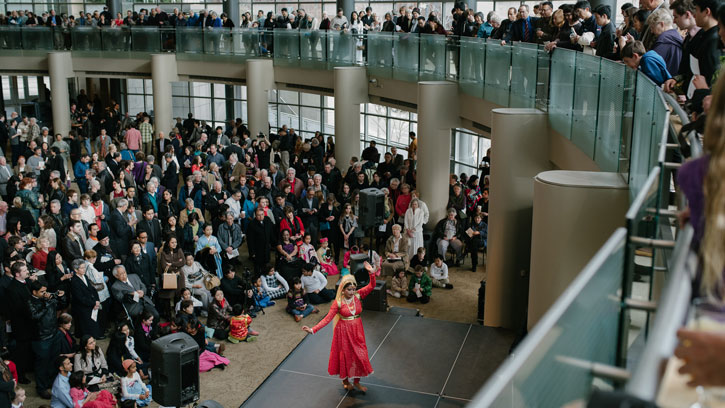 From the moment you enter the doors of Benaroya Hall on Sunday, you’ll be swept along in a whirlwind of color, motion and sound. Choirs. Lion dancers. Taiko drummers. And of course, the Seattle Symphony.

Now in its eighth year, Celebrate Asia honors Seattle’s Asian-American community through a concert that explores the rich musical traditions of Asian countries alongside Western classical music. Although you won’t encounter Mozart or Beethoven among the festivities, you will have the opportunity to see Western classical music through the eyes of today’s Chinese, Iranian and Russian composers.

This year’s concert features two world premiere compositions. The first is by Shao Zheng, who won this year’s Celebrate Asia Composition Competition. The title of Shao’s piece, Bai Chaun Fu Hai, translates as The Rivers and Streams All Rushed to the Ocean. Shao explores the sounds of nature through Chinese culture and musical influences. The music begins with “multiple themes and instruments to refer to the streams and tributaries,” Shao explains, and it continues with “free micro-counterpoint to depict the process of the streams flowing.”

The second world premiere is by Iranian composer Alireza Motevaseli, who was commended by the jury of the Composition Competition, and is written for an Iranian santoor, performed by Anjali Joshi, and accordion, performed by Murl Allen Sanders. A native of Tehran, Motevaseli is a composer, conductor and bassoonist who performs with the Tehran Symphony Orchestra.

Last week, Joshi and Sanders gave us a preview of the commission:

In addition to the two world premieres, pianist Charlie Albright will be featured in Xiagang Ye’s Starry Night, which premiered in Beijing at the opening ceremony of the 2008 Olympics. Albright explains the visceral experience of playing this piece, “the sights, sounds and emotions of Asia become tangible…It is easy to ‘see’ the stars and expanse of space, ‘feel’ the pride and culture of the Far East and ‘experience’ the emotions all contained within this whirlwind journey.”

Composer Tan Dun is best known for his award-winning score for Crouching Tiger, Hidden in Dragon. In his latest piece, Passacaglia: Secret of Wind and Birds, there is an unusual “instrument” — he used six ancient Chinese instruments to record bird-like sounds that are to be played on smartphones as a part of the performance, using these devices as unconventional instruments.

“Looking at ancient examples of Chinese music there are so many compositions that imitate the sounds of nature and, specifically, birds,” Tan Dun wrote. “With this in mind, I decided to start by using six ancient Chinese instruments, the guzheng, suona, erhu, pipa, dizi, and sheng, to record bird sounds that I had composed.”

The concert will be conducted by Jindong Cai, an orchestra conductor and professor from Stanford University who is a leading advocate of music from across Asia.

Reserve your seat and join us for the eighth annual Celebrate Asia concert on Sunday, January 31.