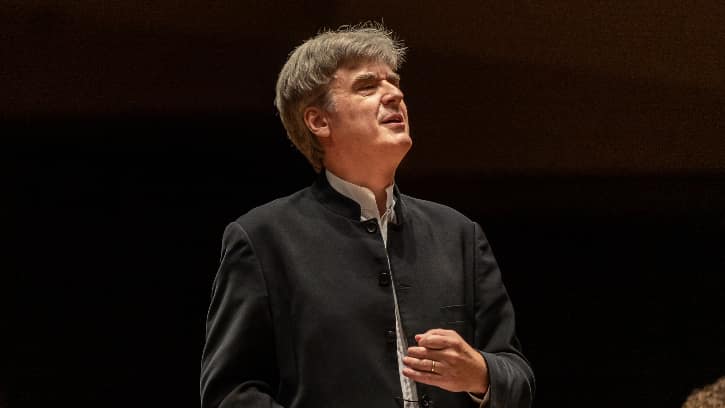 As we enter a new year, Seattle Symphony Music Director Thomas Dausgaard reflects on his musical beginnings in this specially curated playlist.

Editor’s Note: Music Director Thomas Dausgaard will be sharing monthly playlists throughout the 2020–2021 season. Featuring his unique blend of passion, intellect and joy, each playlist will introduce you to some of the music he loves as well as his unique approach to curation.

A new year, a new beginning. This playlist is about my earliest musical beginnings: the LP I listened to from early on, and the artists performing in the first concert I went to.

My earliest beginnings in music were listening to Beethoven’s Fourth Piano Concerto on a small LP. The concerto was divided on 2 sides, and the LP had a characteristic bright red (His Master’s Voice) label in the center. Aged 2 or 3, I could not yet reach the record player, so as the record (often) came to its finish, I would ask: “Red, turn it over (please).” Later, I would play along with my father when he played jazz on the piano. I would expand what I listened to and also play along on homemade percussion and penny whistles. I would often listen to LPs with the wonderful American pianist Teddy Wilson. Copenhagen was at that time a glowing center for jazz, and many leading American jazz musicians came to perform and even live here. As luck would have it, Teddy Wilson gave a concert when I was 6, and as he was my father’s number one jazz pianist, we went to hear him at the Odd-Fellow Palais. Had that beautiful concert hall not burnt down 30 years ago, I think I could still have pointed out the seat where I sat on its little balcony with red seats. Otherwise the colors where white and gold, and it was altogether a very festive place where I was to experience the kind of life-changing classical concerts later on. From the entrance on a majestic little square to the foyer with its blue ceiling, up the stairs from which you would look out over the sea of people and then into the brightly lit jewel: the hall, resounding with voices full of expectation. The slightly creaky doors would be closed, the voices quietened down, lights went down. Silence.

It was all magic when it began: Teddy Wilson played together with a bass player from Denmark who was to become world-famous, Niels Henning Ørsted Pedersen, and Makaya Ntshoko on drums. But most spectacularly a little into the concert the great saxophonist, Ben Webster, entered — in a wheelchair! And with a leg covered in plaster, as he had had an accident. And not only that; when he played it was with a sound so intense and heartwarming that for me he stole the show.

In this playlist I present you the three artists from this memorable concert:
Teddy Wilson sparkles in a number from one his LPs that I loved, arrangements of Gershwin tunes. Niels Henning Ørsted Pedersen — or NHØP as he was called — performs a suite of Danish folksongs, very well-known and beloved here. He plays with Ole Kock Hansen, piano, who taught me jazz at the Royal Danish Conservatory, and who recently taught my father, as he wanted to develop his playing again. Ben Webster plays one of his heartwarming ballads, here with Oscar Peterson. And finally, Wilson and Webster meet up for an “encore” at the end.

In this pandemic time I have enjoyed going back and listening to what my musical beginnings were and this playlist brings together musical memories from my first concert mixed with memories of my first meeting with Beethoven. If I had only known then that I would now make a playlist where this included my own recording of the Beethoven! It is to this day one of my favorite works, possibly due to its pure expression of lyricism, drama and vitality. May this playlist bring you hope for a new beginning for you in your life and may it give you energy for what this beginning will ask of you.