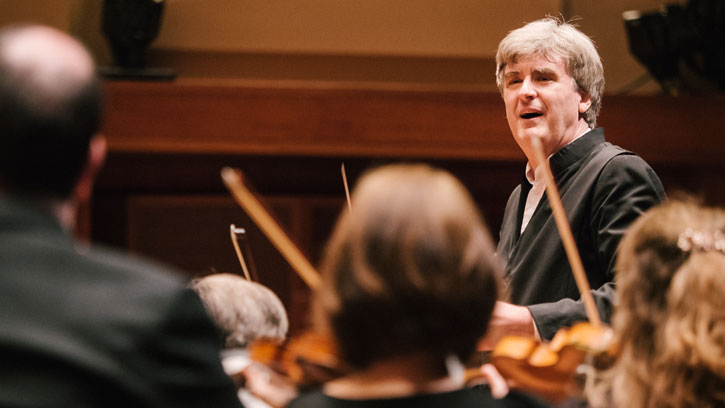 Today, the Seattle Symphony announced that Thomas Dausgaard will continue as the Principal Guest Conductor of the Seattle Symphony for an additional three seasons. The new contract will be effective starting from the 2017–2018 season through the end of the 2019–2020 season.

“This is wonderful news that we can continue our collaboration with our great friend and colleague Thomas Dausgaard,” said Music Director Ludovic Morlot. “Thomas is an outstanding musician who brings such a beautiful range of music, great performances and inspiring ideas that are being embraced by our orchestra with extraordinary enthusiasm.”

Dausgaard, who was in the second year of a three-year contract that concludes at the end of the 2016-2017 season, has been a favorite of musicians and audiences in Seattle. He led the orchestra in their first performance of Mahler’s Symphony No. 10 and conducted the three-week Sibelius Festival.

“I am thrilled to be extending my collaboration with the Seattle Symphony as their Principal Guest Conductor,” says Thomas Dausgaard. “Each time I come back here I am struck by the passion, commitment and excellence of the musicians and the whole Seattle Symphony team. The continuation of our work together gives us a fantastic opportunity to deepen our music-making, which I look forward to sharing with the great Seattle audience in the years to come.”

Dausgaard is the Chief Conductor of the Swedish Chamber Orchestra and Honorary Conductor of the Danish National Symphony Orchestra, having previously served as its Principal Conductor from 2004 to 2011. He is renowned for his creativity and innovation in programming, the excitement of his live performances and his extensive catalogue of critically acclaimed recordings.

Thomas Dausgaard returns to Seattle next week to lead performances of Arnold Schoenberg’s Verklärte Nacht (“Transfigured Night”), Op. 4 for string orchestra on the Delta Air Lines Masterworks Season. The concerts will also include Haydn’s Symphony No. 88 in G major as well as Mozart’s Piano Concerto No. 23 in A major, K. 488 featuring Israeli pianist Boris Giltburg.

Reserve your tickets to hear Principle Guest Conductor Thomas Dausgaard lead the Seattle Symphony in a performance of Haydn, Mozart and Schoenberg on March 10, 12 and 13.