Riding Along with Evelyn Simpson 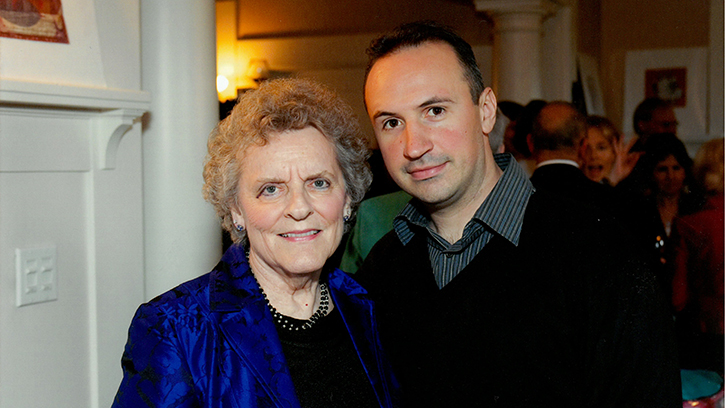 
Getting to know the Symphony’s first Artist Aide

Whether arriving from across the country or around the world, Seattle Symphony guest artists are welcomed at the airport by a member of the Symphony's volunteer Artist Aides. Surrounded by mementoes of her years of service — autographed pictures, gifts from visiting artists with whom friendships have blossomed, and photographs with musicians and composers, lovingly displayed alongside family photos — we sat down with Evelyn Simpson to learn more about the program she founded.

How did the Symphony’s Artist Aide program get started?

Evelyn: I had started as an Artist Aide at the Seattle Opera in 1992, and then in 1995 the Opera called me because the Symphony was just frantic to have someone go out to the airport. They called me and I said, “Oh, I’d be glad to do it.” I went out to the airport, got the person and took them to the hotel. Then I started thinking, they’ve got people coming every week. I approached their staff and explained the program and asked if they were interested. Pretty quickly they decided that they wanted us. That’s how it got going.

Would you share some highlights from your years as an Artist Aide?

E: All the top classical artists in the world who’ve come to Seattle, I’ve driven so many of them. I can’t say all, but so many of them. I keep in touch with some of them. One that comes to mind all the time — because I’m his “Seattle Mom” — is Simon Trpčeski. He made his debut in this country at the Seattle Symphony — he’s from Macedonia — and I was at the airport for him and his father that first time. They needed to get a visa because Simon was going to appear in Canada. We went to the Canadian consulate and they refused. We spent the better part of a day there, but they wouldn’t give them the visa. Thanks to the Seattle Symphony and the Chan Centre in Vancouver — Simon was opening their series that season — when he landed in Canada there was someone waiting with a visa for him. Simon has been back many times since then. His mother and his sister came one time, so I’ve met them too. Every time he comes, he brings a gift. It’s wonderful. It’s made such a big difference in my life.

How did you get your start with symphonic music?

E: When I was a little girl growing up in North Dakota, radio station KFYR in Bismarck played mostly classical music and so that was on all the time. And on Saturdays my mother and I listened to the Metropolitan Opera broadcasts. And then when they were over we’d listen to the Minnesota football games. [laughs]

What is it about the concert experience that you enjoy?

E: I just love classical music. I love to see them play, so I like to sit up close. I’ve sat in the third tier and the sound up there is unbelievable, but I want to see the artists.

In addition to your service as a volunteer, you are a donor and a member of the Musical Legacy Society. What inspires you to support the Orchestra in so many ways?

E: It all started at home in North Dakota when I was a little kid. It was always classical music in our house. We have one of the top symphonies and I just think anyone who can afford to help should. Classical music brings so much joy to people.

It’s been a pleasure speaking with you today, Evelyn. Thank you for your service and for sharing your story with us.

For more information about the Symphony's Artist Aide program or to learn how you can support the Orchestra, contact friends@seattlesymphony.org or call 206.215.4832.