Listening Guide to Elgar’s “The Dream of Gerontius” 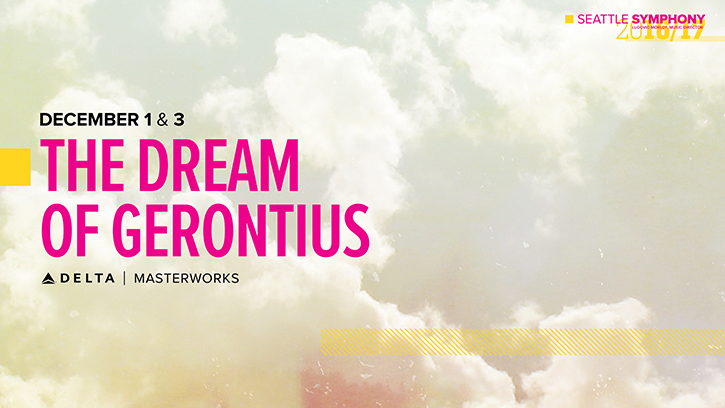 Edward Gardner conducts The Dream of Gerontius with the Seattle Symphony and Chorale on December 1 and 3.

“This is the best of me; for the rest, I ate, and drank, and slept, loved and hated, like another. My life was as the vapour, and is not; but this I saw, and knew; this, if anything of mine, is worth your memory.”

When he had finished composing his oratorio The Dream of Gerontius, Edward Elgar inscribed these lines by the English writer John Ruskin on the final page of his manuscript. Nothing could indicate more clearly the composer’s feeling for this work, its personal importance to him, and his faith in its artistic merit — faith that was vindicated despite a disastrous first performance. Within just a few years Gerontius became widely recognized as the first great English oratorio since those of Handel, written 150 years and more earlier, and its beauty and depth of expression remain widely admired.

The poem that provided both text and inspiration for Elgar’s work was well known in England before the composer set it to music. Its author, John Henry Cardinal Newman (1801-90) had been one of the most important figures in England’s religious life during the Victorian era. Elgar, a practicing Catholic, had received a bound copy of the poem as a wedding gift in 1889, though he may have known it before this. 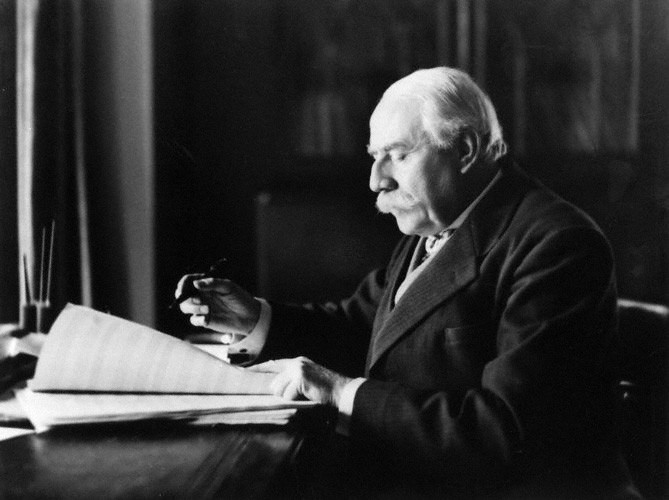 Although it took shape slowly at first, Elgar grew increasingly enthusiastic about his oratorio. He told a correspondent: “My work is good to me & I think Gerontius far beyond anything I’ve yet done — I like it — I am not suggesting that I have risen to the heights of the poem for one moment — but on our hillside ... I’ve seen in thought the Soul go up & have written my heart’s blood into the score.” His wife saw the work in more spiritual terms: “It seems to me that E. has given a real message of consolation to the world,” she wrote in a letter later that summer, while her husband was completing the orchestration; “that dread & terrors are soothed by the infinite sweetness & mercy which penetrates one’s soul with intense emotion.”

By August the composition was finished, and none too soon, since the premiere was set for early October. But now misfortune struck. Shortly before rehearsals were to begin, the director of the Festival chorus caught pneumonia and died. He was replaced on short notice by his retired predecessor, an elderly man in poor health who was not up to the task of mastering Elgar’s challenging score. Choristers reported that his rehearsals were unfocused and often curtailed, owing to his lack of stamina. By the time Hans Richter, the excellent German conductor charged with leading the concert, arrived in Birmingham, it was too late to salvage a decent performance.

Elgar’s dejection could not have been more profound. As indicated at the start of this article, he felt that the music for Gerontius was “the best of me,” and he reacted bitterly to its defacement at the Birmingham concert. “I have worked hard for 40 years,” he lamented in a letter to his publisher, written six days after the premiere, “and at the last, Providence denies me a decent hearing of my work.” He vowed never to attempt any sacred composition again.

But while depressed over the singing of his oratorio, Elgar might have taken heart that it was received well despite its performance. Remarkably, most of the critics in attendance recognized it as a major achievement. “I can honestly and frankly say,” wrote one, “that no composition by an Englishman equals it in sheer technique, to say nothing of real poetic feeling.” Another reviewer declared that he “felt all my preconceived antagonism to the poem melt away before Elgar’s setting, and [I] left the hall throbbing with emotions that no English work has rased in me heretofore.”

These and similar encomiums augured well for the composition’s future, and it was not long before The Dream of Gerontius rose from the wreckage of its premiere to a position of high esteem among Elgar’s works, and within English music generally. Performances in Manchester and other English cities followed in 1902, as well as in New York and Chicago. The following year, Gerontius reached London in a performance conducted by Elgar in the Catholic Westminster Cathedral.

What to Listen For

The work begins with a long orchestral prologue that sets forth a number of consequential thematic ideas. August Jaeger, Elgar’s closest friend, wrote a “thematic analysis” of the score under the composer’s supervision, identifying various themes with particular ideas. The first subject heard is “Judgement,” the most important motif in Gerontius; an agitated figure rising in the brass is “Fear,” while a more serene, chant-like phrase is “Prayer.” There are other melodic constructs indicating “Sleep,” “Despair,” and more, but it is hardly necessary to follow this detailed taxonomy. Elgar would have been the first to insist that the music’s meaning ought to be self-evident without verbal explication.

Like all good oratorios, The Dream of Gerontius has some especially dramatic moments. The title character’s death throes bring forth powerful and violent music. The band of demons encountered by the soul and guardian angel sing an appropriately devilish fugue. And the soul’s plea to be taken to Purgatory is an impassioned aria prepared by a great orchestral outburst. Still, the work’s outstanding moments are not these but, rather, expressions of religious rapture. Two are especially notable: the great angelic chorus of praise (“Praise to the holiest”), and the final aria for the angel and chorus (“Softly and gently”). The latter, especially, accords with Alice Elgar’s assertion about Gerontius’s “message of consolation to the world,” the “sweetness & mercy which penetrates one’s soul with intense emotion.”

Recommended Recordings of The Dream of Gerontius

There are many wonderful recordings of The Dream of Gerontius available today, but the following two are generally regarded to be among the most representative of Elgar’s vision.

Although The Dream of Gerontius is held in high esteem in England, it is less frequently performed in the United States. One challenge is the technical complexity of the work. The failure of the premiere was regrettable, of course, but not inexplicable. Elgar made a conscious decision not to write down to amateur singers, and his choral passages require that intricate counterpoint and unusual harmonies be negotiated knowingly and with confidence.

The other impediment to a more universal appreciation of Gerontius is its text. Newman’s poem certainly is esoteric fare: an account of an aged man (the literal meaning of the name “Gerontius”) in his final hour; his death and the reawakening of his soul in the afterlife; his communion with a guardian angel; and his consignment to Purgatory for purification. Predisposition to Catholic mysticism, however, is not required to savor Elgar’s composition. One can find that reservations about the poem melt away before the music’s power.

The Dream of Gerontius only appears on concert programs a few times in our lifetime – hear Edward Gardner conduct it with the Seattle Symphony and Chorale on December 1 and 3.