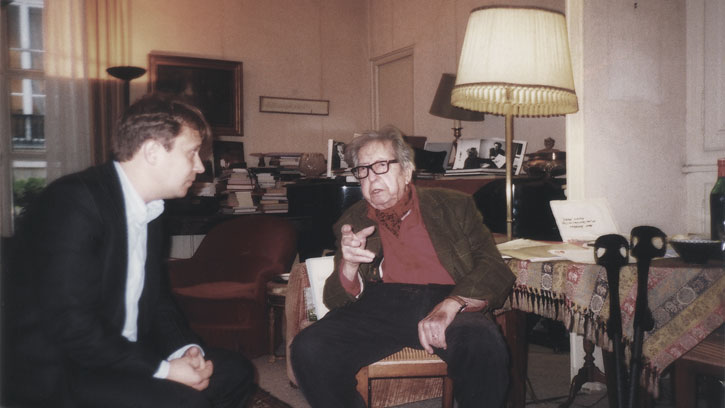 Henri Dutilleux, the visionary French composer known for his sensuous orchestral music, would have been 100 years old today. After passing away at the age of 97 in 2013, he left behind a small but exquisitely orchestrated body of symphonies and chamber music.

Although he was between Olivier Messiaen and Pierre Boulez in age, Dutilleux primarily drew his inspiration from the music of Ravel, Bartók, and Stravinsky. Writing in The New York Times, Paul Griffiths described Dutilleux as a “moderate modernist.” Throughout his career as a composer, his music gradually shifted away from regular tonality as he pursued more vivid colors and harmonies, but he always retained a sense of movement and drama in his works.

Ludovic Morlot, Music Director of the Seattle Symphony, spent three months at Tanglewood in 2001, where he first met Henri Dutilleux.

“Seiji Ozawa and the Boston Symphony Orchestra were rehearsing Dutilleux’s The Shadows of Time, and I had the privilege of sitting next to Dutilleux during the rehearsals and witnessing firsthand his considerable creative powers at work as he further refined the score,” said Morlot. “He was a perfectionist in the best sense of the word.”

Morlot has been exploring Dutilleux’s orchestral works with the Seattle Symphony, culminating in a series of recordings on the Symphony’s in-house record label, Seattle Symphony Media. The first volume in the series features The Shadows of Time, drawing on Morlot’s personal connection to Dutilleux.

“He made 20th-century music come alive for me and, in the process, deepened and enriched my understanding of it,” said Morlot. “I feel grateful to have known him.”

From everyone at the Seattle Symphony, joyeux anniversaire, Monsieur Dutilleux!

Want to learn more about the music of Henri Dutilleux? You can find Volume 1 and Volume 2 of Dutilleux’s orchestral works, featuring Music Director Ludovic Morlot and the musicians of the Seattle Symphony, on iTunes and Amazon.