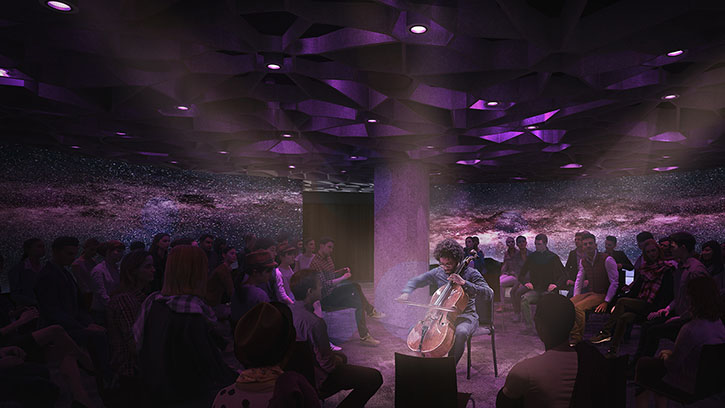 With five world premieres and music from over 70 contemporary composers, the launch of Octave 9: Raisbeck Music Center represents a bold commitment to the music of today.

Octave 9 will be a center for learning and community collaborations, providing a home for the Seattle Symphony’s community and family programs including the Lullaby Project, Sensory Friendly Concerts and First Concerts.

“Octave 9 is groundbreaking,” shared Krishna Thiagarajan, President & CEO of the Seattle Symphony. “In this space, we will live and breathe today’s art and support contemporary composers with a dedicated medium for their work. Arts are the way a society articulates itself, and Octave 9 signifies the importance of supporting the voices of today.”

Tickets for concerts and events in Octave 9 are available starting Friday, November 16, 2018. A complete schedule of opening festivities, including a free community open house, will be announced in February.

As part of the opening celebrations, the 24-hour, nonstop Contemporary Music Marathon will feature works by over 50 composers, including an overnight “sleepover” incorporating an interactive music installation.

Beginning at 5 p.m. on March 23 and ending at 5 p.m. the next day, the marathon will open with the world premiere of a piece by Melody Parker that showcases the extensive range and ability of Octave 9’s sonic capabilities using Meyer Sound’s Constellation® Acoustic System.

The Seattle Symphony’s Composer in Residence Derek Bermel is curating a series of concerts and community experiences in Octave 9 as part of his residency. Bermel’s first program tells a narrative of American music at the intersection of jazz and classical music. Bermel’s series also includes commissioned works from Seattle-based composers Stephen Newby and Kaley Lane Eaton. Bermel has been commissioned to compose a new work for Octave 9 that will receive its world premiere on April 28, utilizing the unique technological capabilities in the space.

Cellist Seth Parker Woods is the first-ever Artist in Residence for Octave 9, from March 2019 through the 2019–2020 season. He will be a featured performer throughout the opening celebrations, including the March 10 program curated by Derek Bermel and in an hour-long self-curated program during the Contemporary Music Marathon. His marathon performance will include interactive and electronic works by Ryan Carter, Nathalie Joachim, George Lewis and Annea Lockwood.

Additional concerts in the space will feature in-depth conversations with artists and composers, exploring their creative process during presentations of their music.

Surrounding the performance of their works on the Delta Air Lines Masterworks Season, composers John Harbison, Heiner Goebbels and Hannah Kendall will each share and discuss their music and unveil the inspirations that go into their compositions.

University of Washington Professor Emeritus Dr. Larry Starr will lead conversations in Octave 9 which will further explore the music and themes presented as part of the Seattle Symphony’s Delta Air Lines Masterworks Season, including the music of Shostakovich in March, the current season’s emphasis on French music in April, and the music of Brahms in May.

Building on the history of Soundbridge Seattle Symphony Music Discovery Center, which occupied this space from 2001–16, Octave 9 will continue to be a home for the Seattle Symphony’s family, school and community programs.

The launch of Octave 9 marks the return the Seattle Symphony’s First Concerts, which invite children ages 3­–5 to explore various instruments in the orchestra including the French horn, harp and violin.

The Seattle Symphony’s Sensory Friendly Concerts, a program designed specifically for children on the autism spectrum and with other sensory sensitivities, will move into Octave 9. The concerts invite families with children ages 5–8 to enjoy small chamber works and participatory group songs in a relaxed setting.

Since 2013 the Seattle Symphony has partnered with Mary’s Place, which shelters families experiencing homelessness, to present the annual Lullaby Project. The Mother’s Day Lullaby Project Concert will share the lullabies created by Mary’s Place parents during the workshop.

The launch of Octave 9 coincides with the 20th anniversary of Benaroya Hall, the Seattle Symphony’s home since 1998. Centrally located in downtown Seattle across the street from the Seattle Art Museum and blocks from the Harbor Steps, Pike Place Market and the Seattle Theater District, Octave 9 will add a third performance venue to Benaroya Hall.

Designed to take full advantage of new technologies, Octave 9 seamlessly transforms to become a performance space, meeting room or interactive classroom, adapting the structure of the space and the acoustics to suit any needs. In addition to transforming to the needs of a specific performance or activity, Octave 9 ensures that each visitor’s musical experience is tuned to perfection, no matter where they are in the room.

Octave 9 is funded through a combination of public and private funds, spearheaded by a $2 million match from local philanthropists James and Sherry Raisbeck. Please consider a donation to support this important project today!

To learn more about opportunities to support this project, please contact Associate Vice President of Development Renee Duprel at renee.duprel@seattlesymphony.org or 206.215.4764.

Support for the inaugural season of artistic programming for Octave 9: Raisbeck Music Center is generously provided by the Judith A. Fong Music Directors Fund.

Benaroya Hall, including Octave 9, is owned by the City of Seattle and is operated and maintained by the Seattle Symphony under a lease agreement. The city also has invested funds to help make Octave 9 possible and preserve an important public asset.