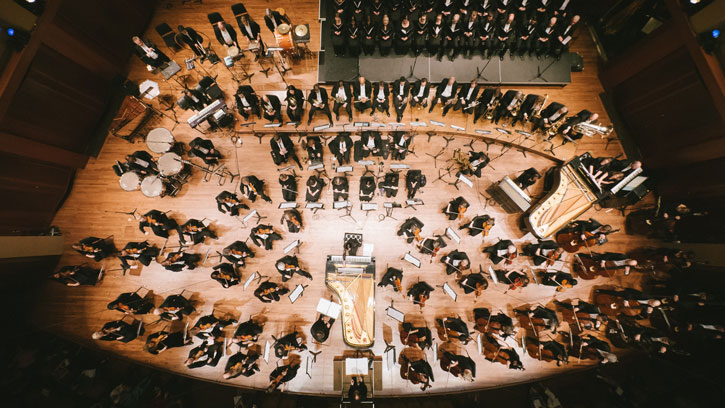 Charles Ives has been described as a traditionalist and as a modernist. His music has been characterized as nostalgic and as futuristic. What makes Ives truly remarkable, however, is that not one of these descriptors is correct on its own. Taken together, they offer a deeper understanding of his aesthetic: a visionary celebration of diversity.

The all-Ives recording features the live performance of Symphony No. 4 and studio recordings of Central Park in the Dark, The Unanswered Question and Symphony No. 3. This is a continuation of the Orchestra’s survey of nearly all of Charles Ives’ symphonic works in concert on its in-house recording label, Seattle Symphony Media, which released Charles Ives’ Symphony No. 2 on an all-American disc last year.

Trimpin: Above, Below, and In Between (Live) - EP

Also on January 8, the label released a digital-only recording of the live performance and world premiere of a site-specific installation and composition Above, Below, and In Between by Seattle-based sound sculptor Trimpin. The piece was commissioned by the Seattle Symphony and premiered on our late-night [untitled] series on May 1, 2015, with Ludovic Morlot conducting sound sculptures and live musicians with the aid of a Microsoft Kinect.

Trimpin, a singular figure in American music, has made his name constructing intricate installations in which computer-controlled signals trigger acoustic sounds — sometimes on traditional instruments (such as pianos and guitars), other times on new instruments that he invents (including an oversized, microtonal bass clarinet).

The digital release coincides with the exhibition Hear We Are at Winston Wächter Fine Arts Seattle (on view January 21 through March 9, 2016), which is inspired by the Seattle Symphony commission and consists of various visitor activated listening and performance stations along with exhibition of sound sculptures.