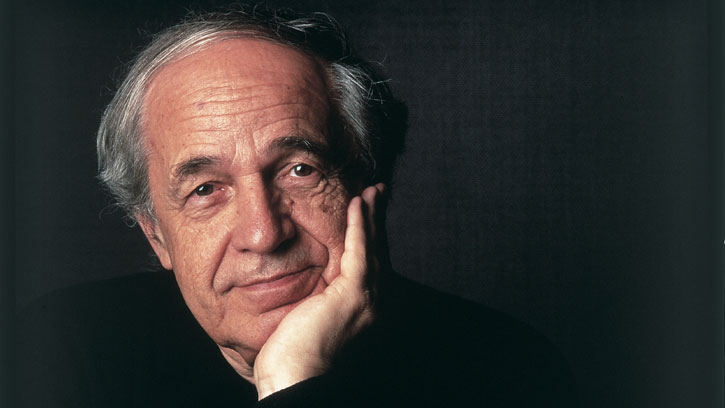 This weekend’s concerts are dedicated to the memory of Pierre Boulez (1925–2016), the revolutionary French composer and conductor, who passed away at the beginning of January at the age of 90. Boulez was equally known for his commitment to contemporary music and his command of the podium, and he helped blaze a radical new path for classical music in the 20th century.

According to Music Director Ludovic Morlot, his passion and interest in new music was inspired and nurtured by his relationship with Boulez

I first met Pierre Boulez in Paris. He invited me to direct the Ensemble intercontemporain which he founded in the 1980s. I developed a strong interest in new music from that meeting. The last time I encountered him was three years ago when he attended my performance of Messiaen’s Trois petites liturgies de la Présence Divine with the Chicago Symphony Orchestra. Though he claimed to dislike this piece, at dinner afterward he told me that “it’s not such a bad piece.” It was my dream to bring him here to conduct his music, but his health never allowed for this to happen. I loved him dearly.

Renowned for his performances of contemporary music, Boulez was equally famed for his interpretations of 20th century classics, including the music of Bartók. Pianist Jean-Efflam Bavouzet, who joins the Seattle Symphony this week for performances of Bartók’s Piano Concerto No. 3, recalls performing that work with Boulez:

Pierre Boulez represents for many of us not only a man with a superior mind but also a “superior heart,” a guiding light, a “point de repère” to quote the title of one of his books. His generosity and support meant a driving force for me and I am immensely grateful for the time he gave me working on his piano music which was so inspiring for other repertoire as well.

On stage his poised gestures and the supple movements of his hands put the musicians at ease and gave confidence in order to present music at everybody’s best. Performing Bartók’s Piano Concerto No. 3 with Pierre Boulez stands among my most memorable experiences and as the starting point of a long, highly enriching relationship and friendship. I would like to dedicate this series of concerts with Maestro Morlot and the Seattle Symphony to his memory.

Boulez’s influence on classical music is incalculable. Paul Griffiths, writing for The New York Times, captured Boulez’s achievements best: “The tasks he took on were heroic: to continue the great adventure of musical modernism, and to carry with him the great musical institutions and the widest possible audience.”

Reserve your seats to hear Music Director Ludovic Morlot and pianist Jean-Efflam Bavouzet perform Bartók, Beethoven and Ives with the Seattle Symphony on February 11, 13 and 14.