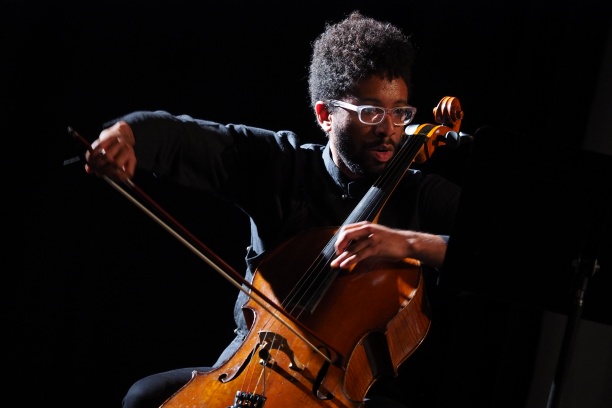 Following his musical studies in Australia, violist Brett Dean traveled to Germany in 1985 and became a member of the Berlin Philharmonic Orchestra. In addition to his orchestral career, Dean gave performances as a soloist including numerous premieres. Initially an arranger, Dean soon became established as a composer in his own right and returned to his home country to hone his skills.

The thousands of miles that separated him from his Berlin colleagues did not weaken their artistic relationship. In 2002, the Berlin Philharmonic commissioned Dean to write a work for strings, Testament (Music for 12 violas), later arranged for chamber orchestra. Dedicated to the Berlin Philharmonic’s viola section, Testament is named after Ludwig van Beethoven’s 1802 Heiligenstadt Testament, a letter written to his brothers as the composer worked through the reality that his hearing loss was not only progressive but irreversible.

In Dean’s summary of the piece, he describes one “particularly haunting sonic idea” during his writing process: “… the quietly feverish sound of Ludwig’s imagined quill writing manically on leaves of parchment paper.” This image of Beethoven writing through the reality of his hearing loss is evoked through short repetitive motives, harmonics, lyrical passages, pizzicatos, bent pitches and glissandos. Melodic quotations of Beethoven’s “Razumovsky” String Quartet No. 7, Op. 59, No. 1 are brutally interrupted followed by the ensemble coming together and breaking apart in intense, dissonant polyphonic sections. Testament ends with more confidence but the uncertainty still remains: which path will this man take?

Tyshawn Sorey, the Seattle Symphony’s 2019–2020 Composer in Residence, joins forces with the Symphony’s 2019–2020 Artist in Residence Seth Parker Woods for the premiere of Sorey’s For Roscoe Mitchell for Cello & Orchestra. A multi-instrumentalist, composer, improviser, 2017 MacArthur Fellow and Presidential Assistant Professor of Music at the University of Pennsylvania, Sorey is a musician who relishes stylistic fluidity, technical deftness and conceptual creativity. His pieces highlight the narrow boundaries between composition and improvisation, and rejection of musical categories. Commissioned by the Seattle Symphony, For Roscoe Mitchell is named for the avant-garde saxophonist, composer and educator Roscoe Mitchell, the newest in a series of works — or as Sorey calls them, non-certos — named for the composer’s contemporaries and collaborators.

For Sorey, music is a conceptually expressive process; a participatory act where performer(s) and listener(s) engage with the composer’s vision while contributing their own. Listening to his albums and live performances, several things become apparent. Sorey is less interested in melodic, linear ideas. Not that motives or repetitious figures aren’t important, but they are sometimes secondary to the sonic textures at play. Because of this, tempos are often stately, slow or suspended; group sound is less about blending than retaining an instrument’s specific sound; tonality is mellifluous and uncertain, leaning on the resonant rather than the strictly harmonic. Through this approach, Sorey requires his listeners to be ever involved, to wonder what may come next, to consider how their expectations are being challenged and to embrace a particular, fresh musical experience.

With any world premiere, it is best to hear from composers in their own words. What follows is Sorey’s description of For Roscoe Mitchell for Cello & Orchestra:

For Roscoe Mitchell is the first of two single-movement works for soloist and orchestra that I composed during the politically and environmentally tumultuous era of 2020 and largely draws inspiration from performances with Mitchell during recent years, most recently evidenced on his 2017 ECM recording titled Bells for the South Side. Much like Mitchell’s iconoclastic work over the past six decades, my music seeks to deal with sound and the absence of sound. For Mitchell (and likewise for myself), space, sound, and silence are aspects in music that are of equal importance.  I find myself identifying very strongly with this idea because I find that a lot of music today is more concerned about “getting to something” or “going somewhere immediately” than it is about being drawn inward towards the infinity that exists within a given moment and staying with that moment as time passes. This infinity of the moment, coupled with Mitchell's aesthetic ideal, is realized by the vivid evocation of timelessness that is central to the work in its overall formal and sonic design.

Let me reiterate that this composition is for soloist (in this case, cello) and orchestra. Why not simply call this a “cello concerto?” Of course, For Roscoe Mitchell may be viewed as a “cello concerto” — but in many regards, it is far from what a concerto represents. (The fact that it is in a single movement without a fast-slow-fast schema is a few of many key reasons why I assert this point.) Rather, this is a composition for cello and orchestra. The conjunction “and” is emphasized here to illustrate my intentions — i.e., this piece calls for both the soloist and the orchestra to be heard together as a single unit in conversation with itself and not as a duel between the two entities. The typical soloist-orchestra hierarchy that is often demonstrated in the concerto genre is not present anywhere — the soloist is not the protagonist; the orchestra is not the antagonist; there are no flashy, technical passages to listen for; and, finally, there is no cadenza to close out the piece. There is only the moment for the listener to follow, from one event (or sound) to the next.

Disclaimer: As I often do not like to publish program notes, I believe that what the listener hears is solely informed by their experiences. However, I felt it necessary to publish notes here given the nature of what is “expected” in this piece, ad nauseam. This is all to request for the listener to put any and all expectations aside — expect nothing — and let the piece do what it does. I hope this music will speak to the listener in some way or another. – T.S.

For more than two centuries, Beethoven’s deafness has been framed as a narrative of tragic triumph. After all, what is more devastating to a musician than the loss of one’s hearing? And yet some of his most studied and performed pieces were completed during and after he reached clinical deafness. The mainstream romanticizing of Beethoven’s navigation of hearing loss is part of an insidious practice of viewing disability as something to be overcome; when in reality people with disabilities have lived and continue to live full and vibrant lives.

Beethoven’s career is case in point as he supported himself through performances and commissions for over thirty years. His Symphony No. 4 in B-flat major was dedicated to and commissioned by Count Franz von Oppersdorff, completed at the count’s palace in the late summer of 1806. Of his nine symphonies, Beethoven’s Fourth often receives the least amount of attention, no doubt aided by its chronological position between two major forces in the symphonic repertoire — Symphony No. 3 in E-flat major, Eroica (1803) and the Symphony No. 5 in C minor (1808). Nonetheless, the Symphony No. 4 features Beethoven’s particular approaches to symphonic writing, approaches that would become precedents for the Romantic era of classical music through the majority of the nineteenth century.

Adagio–Allegro vivace begins with a slow introduction, a structure formalized by Beethoven’s mentor and predecessor Franz Joseph Haydn. The introduction’s uncertain character sets up the exuberant first movement, where homophonic textures (main melody with supportive material), sharing of melodic fragments between sections and timbral blending enhance its light character. Adagio is sweet and contemplative, combining key elements of Beethoven’s style: dramatic dynamics, emotional lyricism, weighted accents and prominence of the timpani. Allegro molto e vivace’s melody is instantly familiar; its scherzo form became the standard third movement of Romantic symphonies. Allegro ma non troppo features quick scalar passages, sudden fortissimos and gradual crescendos with an energetic tempo that drives the movement forward. Near the end, the tempo, dynamic and texture are suddenly drawn back, only for the boisterous character to immediately return, bringing the symphony to an exuberant end.