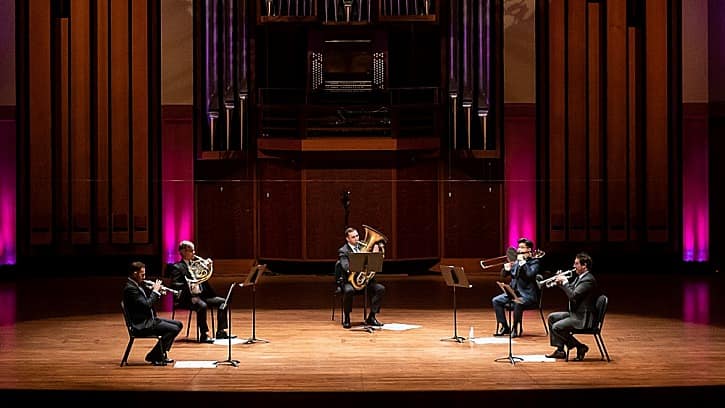 Seattle Symphony musicians present the second chamber program of the season with an impressive selection of contemporary works by Tan Dun, Toru Takemitsu, Anthony Barfield and Allison Loggins-Hull, broadcasting from the Benaroya Hall stage on Thursday, April 29, 2021, at 7:30pm on Seattle Symphony Live.

Anthony Barfield’s Gravity, a recent work premiered only in late 2020, is scored for a brass quintet consisting of a French horn, a trombone, a tuba and two trumpets. As the composer writes, Gravity was inspired by Langston Hughes' short but intense poem, “Harlem” (1951), which poses the question, “What happens to a dream deferred?” The question resonates for all today as dreams are deferred because of the pandemic; it is particularly relevant to the “dreamers” of the DACA program whose plight has gone unanswered for many years, forcing them to live in uncertainty and dread. However, the question posed by Hughes' poem lies at the core of America’s history: the centuries-long struggle by a significant segment of Americans to overcome injustice and achieve equal rights and fair treatment. Barfield’s composition, with its haunting melody, the bright sonority of the instruments, and a contemplative and solemn slow-dance rhythm, is infused with a sense of melancholy and loss, but also with hope and determination to fight for an eventual satisfying response. The implication of the title becomes clear through Hughes’ question.

Allison Loggins-Hull’s Hammers is written for solo flute and a quartet of percussionists, each playing various numbers and sizes of drums. Beginning with a simple pattern, the music becomes increasingly complex in rhythm and texture. At the same time, the flute floats above the other instruments, not so much playing a melody as producing short snatches of hiccup-like pitches as if it were another drum of a totally different timbre. The piece is reminiscent of the solo violin in Stravinsky’s L`Histoire du Soldat, but the percussion element calls to mind Ghanaian Adowa drumming, complete with a “bell” as in its African counterpart. The flute switches to a second theme of calm sustained notes, like sighs of contentment contrasting with the hiccups. Repeating itself at about the halfway point to give the listener a sense of reprieve and recollection, the five-minute piece is an embodiment of fun and wit, offering quite a contrast to the preceding Gravity.

Toru Takemitsu’s Rain Tree is written for three percussionists, playing suspended gongs and also playing xylophones with metal or wooden keys. The contrast to Hammers is striking, even though both pieces feature percussion instruments. While Hammers is full of energy, vigor, drive and fire, the twelve-minute Rain Tree is the polar opposite: its “rain drops” of individual gong and xylophone strokes are for the most part soft and gentle, and the metaphorical “tree” grows at a glacial rate. Through Rain Tree, Takemitsu expresses the central Japanese aesthetic principle of ma found in many traditional performative arts such as shakuhachi-playing and Noh theater, in visual arts like painting and calligraphy, and in the spatial arts of flower arrangement and room design. Meaning literally “gap”, “pause” or “negative space,” the word denotes silence in time, emptiness in space, blankness in the mind and a feeling of “distance” or detachment. For example, the delicate individual strokes on a suspended gong that begin the piece are like distant temple bells, with each reverberating tone emphasizing silence and empty space. Later there are sudden eruptions of summer showers and springtime bursts of blossoms and pollen through the frenzied cluster of notes on the xylophones. These only further accentuate the moments of ma that are interspersed. The concept of ma has its origin in an ancient Chinese Taoist text of the 6th century BCE called Tao Te Ching, two lines of which capture ma’s essence: “Thirty spokes meet in the hub, though the space between them is the essence of the wheel; pots are formed from clay, though the space inside them is the essence of the pot.”

Tan Dun’s Elegy: Snow in June is written for solo cello and four percussionists. Far from exhibiting the principle of ma (as in the previous piece), it is dense and complex, tense and emotional. The percussionists play no less than two dozen bona fide musical instruments such as xylophones, cymbals, timpani, bongos and woodblocks, as well as other sound sources like whistles, cowbells, sleigh bells, bottles, struck stones and the tearing of paper. Although such an assortment could result in cacophonous “noise,” Tan’s masterful score in fact creates a well-organized weave of variegated timbres and textures — endlessly revealing, intriguing and exciting. This tapestry of percussive music forms both backdrop and counterpoint to the melodious cello, which begins with fragmentary phrases that build to a complete thematic statement in the middle and then disperse again. It is sometimes plaintive and sad, imitating the female singing in Chinese opera, and at other times wailing and angry, in counterpoint to the music of its cohorts. The percussionists too make many references to Chinese traditional opera, including the distinctive tonal bending of the small gong, the rubbing of the cymbal-pairs, and the rhythmic patterning of the drums and xylophones. The music is made more meaningful by the title of the composition, which refers to a 13th century Chinese play called Moving Heaven, Shaking Earth: The Injustice to Dou Er, a young woman executed for crimes she did not commit. Before being beheaded, Dou Er cried out to Heaven proclaiming her innocence and the injustice of her doom, with a curse to her oppressors: “my blood will fly skywards, a heavy snow will fall in this month of June, a drought will descend for three years.” These all came to pass upon her execution; hence Snow in June is an alternate title to the play. Mirrored in countless incidents from history and fiction, Dou Er's tragic fate has a powerful resonance for the people of China, most notably — and horrifically — in the nationwide calamity known as the Cultural Revolution (1966–1976), in which an estimated one million people died, most of them the victims of unjust persecution.  It is likely that Tan Dun, who grew up during that period, had this momentous tragedy in mind and composed his piece as an elegy for all of those who suffered and perished, some perhaps near and dear to him.