A momentous release, as Morlot and the Seattle Symphony follow their acclaimed recording of Ives’ Symphony No. 2 with the next installment that includes four of the composer’s greatest works. The rarely recorded Symphony No. 4 is a haunting summation of American musical styles, and one of the masterpieces of American music. It receives here a live performance of staggering authority and eloquence that brings Ives’ multi-layered sonic canvas to new life. Recorded alongside Symphony No. 3 and Ives’ two most beloved short orchestral works, this release is engineered to audiophile standards and set to be an authoritative voice among recordings of Ives’ discography.

CDs may be purchased at Symphonica, The Symphony Store, at Benaroya Hall. Digital downloads and CDs are available through all major online music retailers and streaming services. High-resolution stereo and 5.1 surround files are available from Acoustic Sounds and HDTracks.

In the Spotlight: Composer Angelique Poteat 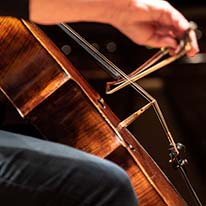 The Hidden Passion of Brahms’ Concertos